In order to pronounce and read in Vietnamese, you need to know the vowels and consonants. In this article, Jellyfish will summarize the consonants and vowels in Vietnamese and how to distinguish between them so as to help you apply Vietnamese with simple words.

Vietnamese vowels are the basic knowledge that must be understood deeply when learning Vietnamese. However, many people are still struggling to understand this. Let’s find out the vowels in Vietnamese with Jellyfish!

Vowels: are the sound when pronouncing, the flow of air going out of the lungs is not significantly obstructed. Vowels can stand on their own or in front of or behind consonants to form sounds in speech. 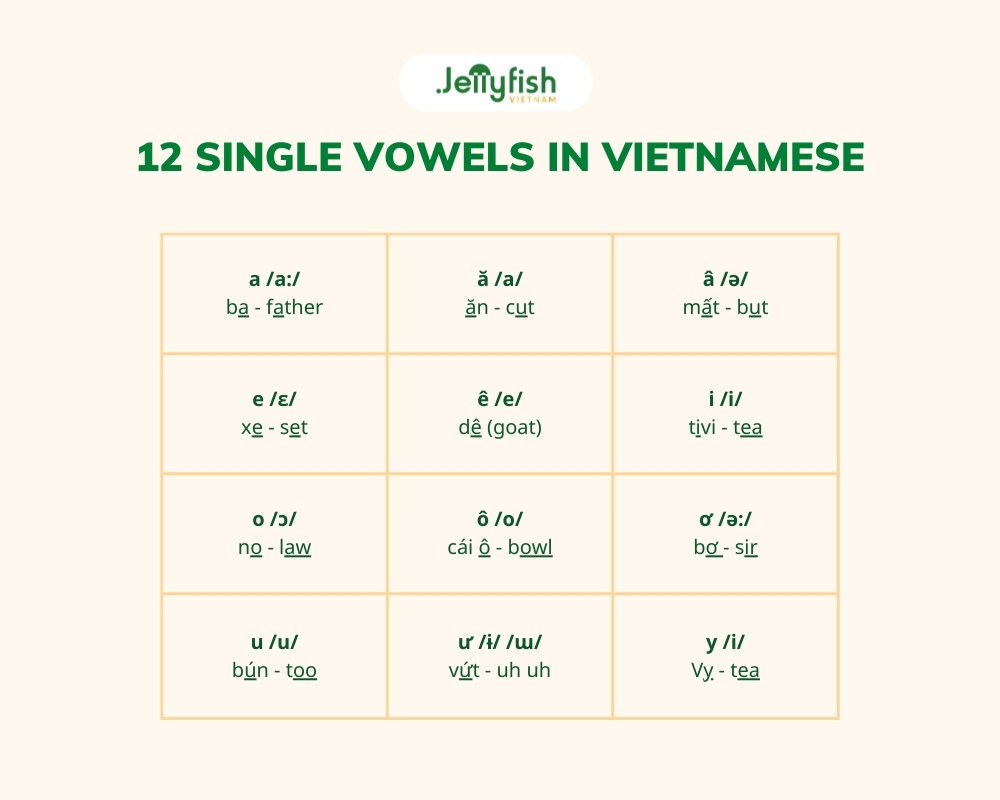 – In addition to single vowels, there are various diphthongs in Vietnamese:

Note: In Vietnamese vowels, it is very important to keep an eye on accented vowels such as ư, ơ, ô, â, ă. Because these vowels are difficult to pronounce and harder to remember than other ones.

2. Position and usage of Vietnamese vowels

Some words generally formed from the combination of vowels, consonants and punctuations. Every Vietnamese vowels has its own position and usage in a Vietnamese word.

Vietnamese Vowels also often have the first, last, or middle position of words or can stand alone.

With diphthongs or triphthongs, they are the combination of 2 or 3 vowels with each other. It is quite difficult for beginners to pronounce, here are some commonly used diphthongs and triphthongs:

How to pronounce diphthongs and triphthongs:

In Vietnamese, consonants consist of 17 letters, in combination with vowels to form a complete word. When combining with vowels, consonants generally stand in front or behind vowels. Here is a consonant table for your reference:

See more: How to speak vietnamese like a navite

Vowels and consonants are the elements in the Vietnamese alphabet. However, these ones have numerous differences. In order to make learning Vietnamese easier, here’s how to distinguish these two components.

Through the above information, surely you also understand more about what Vietnamese vowels are as well as distinguish vowels and consonants in the alphabet. These are two very important components that make up the sound, words and perfection of Vietnamese.

For more information and free consultancy, please fill the form below! We will reach out to you!